How Restaurants Can Learn From The Roaring 20's

The Roaring Twenties has a lot of similarities to what has been going on in recent times. In the early 1920's, it was a time of hope and prosperity. With WWI over, the economy was booming, jazz was all the rage, women's rights was a critical topic, and people were out spending lots of money.

Everything seemed to be going great and people assumed the good times would never end. However, prohibition backfired, women's rights still needed to come a long way, and the economy crash left many in poverty.

So what do the events that happened during the 1920's have anything to do with today - and more specifically, how can the restaurant industry use the past to prepare for the future?

1. Change Is Not Always Bad

2. What Was Once Taboo Could Become Permitted

3. The "Good Times" Do Not Last Forever

Change Is Not Always Bad

To be a woman in the 1920's was tough! Women were basically second-class citizens. They were not encouraged to get an education or pursue a professional career, could not own property after marriage, could not sign contracts, and were denied the right to vote. (Source: http://www.livingvoices.org/teachguide/new09/HMVStG.doc)

Today the ideas of gender identity are being challenged and expanded. Identity today is seen as a fluid scale instead of a static position. Restaurant businesses who take a position on this divisive topic may polarize their customer base. While you may see support from like-minded individuals you may also receive negative publicity from those on the other side. It might be in your favor to remain neutral and simply agree that all humans should be treated fairly and with respect regardless of their beliefs. #Chickfila #CrackerBarrel

What Was Once Taboo May Become Permitted

It could be argued that prohibition was started to help humanity. However, the nation's leaders failed to understand that those who want, will. So regardless of what the laws were, if you wanted to have some spirits, you'd find a way.

Today there are several things that are considered taboo that may become permitted sooner than later. What this means is money. Plain and simple. If you are not profiting from it others will. Now I'm not saying take advantage of what was illegal and has now become legal. I'm saying, if it makes sense for your business, think about how the situation can be leveraged.

Cannabis is still illegal or only legal in certain situations or certain states. In either case, once it becomes widely acceptable and legal across the board, you'll see restaurants dip their toes into that market. Perhaps it's a new flavored ice cream or cocktail or maybe a restaurant concept has strong ties to the cannabis community and tweaks their menu items to boost their targeted clients.

I see that going on right now with CBD. CBD, short for cannabidiol, is a chemical compound from the Cannabis sativa plant, which is also known as marijuana or help, according to the US National Library of Medicine. It's a naturally occurring substance that's used in products like oils and edibles to impart a feeling of relaxation and calm. Unlike its cousin, delta-9-tetrahydrocannabinol (THC), which is the major active ingredient in marijuana, CBD is not psychoactive. (Source: https://www.health.com/condition/pain/what-is-cbd)

So if it makes sense or could draw in positive press, think about how your restaurant concepts could take profitable advantage of taboo situations that become more acceptable in the future.

The "Good Times" Do Not Last Forever

Probably the most parallel event that we can learn from the 1920's is that "good times" don't last forever. And that's not a bad thing. I'm talking specifically about the nation's financial economy. it is healthy that the economy realigns itself every now and then. It promotes strength and growth. Now, i'm not hoping for another major recession but it's hard for me to believe that our economy will continue to grow strong without any hesitation or government assistance forever.

So what should restaurants consider if our economy takes a dip in the 20s?

- Is our current growth rate going to get us in trouble?

- Are the wages we pay in line with what is fair yet profitable?

- Are menu items priced at a competitive but healthy rate?

- Can our company take advantage of a recession or will it hinder us?

Even during a strong economy, these are questions we think about often for our clients. The benefit we have that others may not is our ability to integrate multiple sets of different data sources across multiple restaurant locations and leverage "Big Data" to find insightful nuggets that can prepare our users for the future.

Only time will tell if the 2020s end up being anything like the 1920s. Our society continues to change, become more accepting of what was once taboo and learn that all good things must come to an end. Keeping an eye on trends in your data will help you be prepared for any bumps in the road in order to keep blazing a trail for future generations. 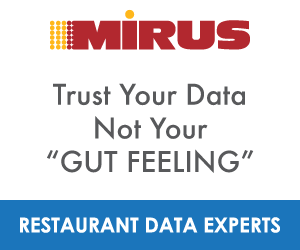 Mirus provides services in data management and solutions in custom reporting for the restaurant industry.

Enjoyed this blog? Share it using the social buttons at the top of the page and leave your thoughts in the comment section below.